As the sophistication of IT systems has magnified over the past years (in terms of both software and hardware complexity & the number of deployed cooperating subsystems), so has the need to separate components responsible for different types of tasks. What eventually led to simplifying the configuration and management processes, that is the broadly understood administration, was the development of master/slave communication model.

The general idea behind it is was allowing two or more completely independent and geographically dispersed programs to communicate with one another in order to achieve a common goal. And so, functioning as a service provider, the master program or device distributes tasks, while several other programs or slave devices are the users of this service, carrying out the issued commands. Such an architectural pattern will prove of great value when wanting to install a specific operating system in chosen locations spread all over the world. From the following article you will learn how to do it now from the confines of your very own EasyDCIM admin panel.

The 1.5.2 version of EasyDCIM was featured with built-in operating system installer supporting two different types of configurations that will be briefly discussed in the following sections.

In case of the basic setup without the use of VLAN, no additional router configuration is in fact necessary. All you need to do is make sure that there are no other active DHCP servers operating within the network as they may interfere with the DHCP server used by EasyDCIM. 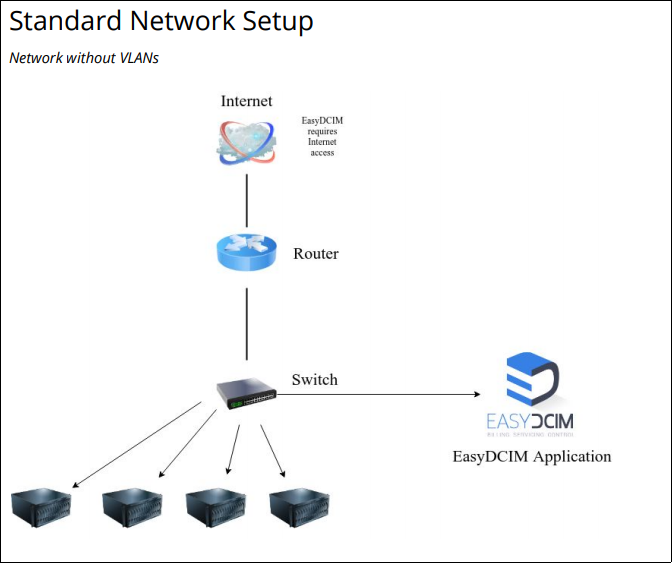 Things look a bit different when you have several VLANs in your data center. First, you need to configure a router or L3 switch that will forward DHCP broadcasts from external VLANs to the EasyDCIM IP address. For this purpose, you can use the “DHCP Relay” function and enable the transmission of broadcasts from one DHCP server to another. 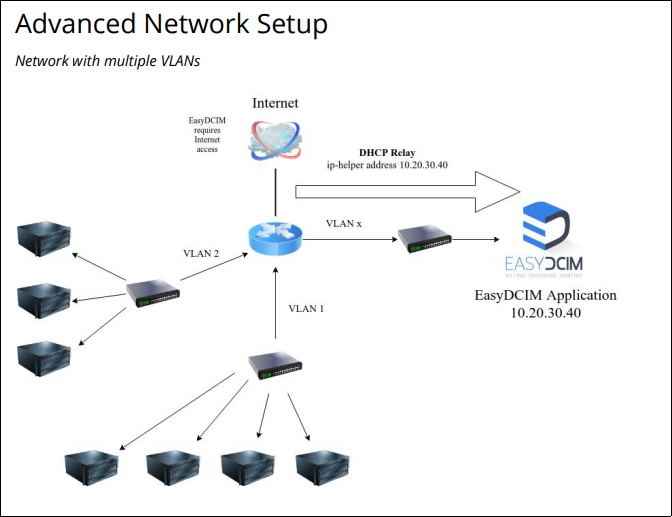 But what if you have no access to the switch at the moment or simply cannot redirect queries from a subnetwork to the given DHCP server? That is a roadblock indeed and the only solution would be to set up another DHCP server in a new location.

Starting from the 1.5.3 version, EasyDCIM extends support for remote applications (called slaves) that can be installed in selected locations around the world. Each application contains three fundamental components including:

There are only two requirements for remote applications:

How to install OS in autonomous locations

As was already stated before, EasyDCIM will serve as your main (master) application. Now imagine you run two locations – one in London and the other one in New York. The devices in your London facility work in the 10.10.10.0/24 subnetwork, whilst those in New York in the 192.168.56.0/24 subnetwork. As for both locations you will need separate DHCP and TFTP servers, the next step is to install in each data center a remote application (slave) that already has DHCP, TFTP and Samba servers built into it. The remote application works on port 8080 and listens to the master EasyDCIM application for commands (EasyDCIM adds only relevant tasks to its database).

An example of such a task may be as follows: “Start X system installation on Y device in London location”. The remote applications set up in New York and London check every five seconds if there are any new orders from EasyDCIM. The New York location will find no instructions to carry on with, but the application in London will immediately begin the process of OS installation soon upon detecting the task. In other words, each slave application has to communicate with the master device only, independently of one another.

Determined to maintain your locations isolated, but still want to be able to exert full control over each of them, without wasting any of your precious time on advanced setups? Master/slave applications finally featured in our system will bring a powerful boon to the supervision of your extensive data center network, and yet at the minimum effort.

To see also what other improvements our newly kicked off EasyDCIM 1.5.3 update has to amaze you with, pay a visit to our previous Blog article!